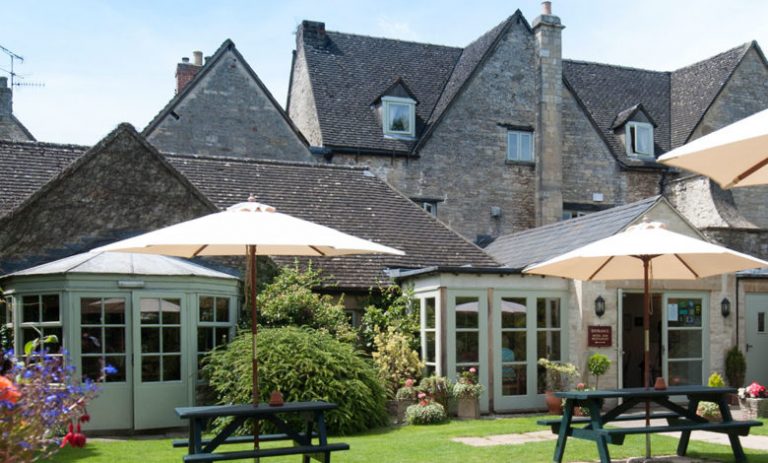 The historic Corinium Hotel in Cirencester has welcomed new operators following the sale of the leasehold of the Grade II listed three-star hotel.

The 20-year lease of the hotel was sold off a guide price of £250,000, though the sale price for the leasehold is undisclosed.

The new operators of the Corinium Hotel, which is believed to date back to the 17th Century, are David and Julie Sherriff. They previously combined farming with a holiday lodge letting and motorhome hire business in Pembrokeshire, Wales.

The couple decided to buy the leasehold of the 15-bedroom hotel so that they could move to the Cotswolds to be closer to relatives.

The name of the Corinium Hotel is linked to Cirencester’s history as a Roman town known as Corinium Dobunnorum.

The hotel is located near the centre of the Gloucestershire town, and features 15 letting bedrooms, including two four-poster bedrooms, as well a bar and lounge area with seating for about 30, and a restaurant with seating for 60. There is also a large, sheltered beer garden at the rear and a car park.

The site has been purchased in a deal negotiated by the specialist Hotels Agency team at Colliers on behalf of the previous leaseholders, who have decided to retire.

Peter Brunt, director at Colliers, said: “The Corinium Hotel is one of those places that I wish I had three to five of, as I could have sold them all. There was huge demand which resulted in competitive bidding. Having sold the leasehold of the Corinium Hotel to the previous operators some 12 years ago, I’m delighted to have acted again in this latest sale of the leasehold to new operators.

“I’m sure they will enjoy taking the helm at this easily-run accommodation-led business, which generates a healthy turnover and is well-located in the thriving market town of Cirencester, often referred to as the capital of the Cotswolds.”

David Sherriff said: “We’re already making plans to set up a pizza kitchen in the hotel garden ready for 12 April when the hospitality sector is allowed to serve customers outdoors. We hadn’t considered a lease purchase when we started looking at hospitality properties in the Cotswolds, but we realised it offered an excellent opportunity when we saw the Corinium Hotel.

He added: “It is a very attractive and well-looked after period property with individual character bedrooms, and a large garden which can seat over 60 people. In addition, the fact that it has a private car park is a huge attraction given the demand for parking spaces in the centre of Cirencester.”