The Old Ferry Inn sold off a guide price of £1m

The Old Ferry Inn, in the Cornish village of Bodinnick that was once home to English author Daphne du Maurier, has been sold off a guide price of over £1m.  The former coaching inn on the banks of the River Fowey was sold to Jenny and Mike West and Paul Worswick, who are now “planning […]

UKHospitality Cyrmu (UKHC) has published a full prospectus of “priority policy” ahead of the Welsh Parliament’s 6 May election, outlining the group’s ambitions for working with the next elected government. The post-pandemic recovery for hospitality businesses are at the centre of UKHC’s proposals to encourage confidence and growth within the sector. Among the trade association’s […]

Palmer to lead the Beaumont Hotel in London

The Beaumont Hotel has announced the appointment of Nicholas Soames as its chairman, and Duncan Palmer as its new managing director. Soames has been on the board of the Beaumont since April last year, and will take on the role of chairman on April 21st. He will play a role in overseeing the development of […]

New hotel, neighbourhood restaurant and bar the Kingston 1 has announced its planned official opening in July, following a soft launch coming out of government restrictions from May 17th. Located in the heart of Kingston upon Thames at 88 London Road, only a five-minute walking distance from the riverside and between Richmond Park, Bushy Park […]

Pride of Britain Hotels has announced that the newly-refurbished Haycock Manor Hotel in Cambridgeshire will be joining its portfolio from 1 September 2021. The site will open its doors on 22 June following “extensive” renovations, and 49 bedrooms and suites will be unveiled alongside two restaurants, a bar and lounge, plus a gym. The second […]

Hospitality trade groups, including the Scottish Licensed Trade Association (SLTA), are calling on the Scottish government to “consider loosening” lockdown restrictions affecting the industry. Currently, Scotland’s bars, restaurants and cafés will not be allowed to reopen indoors and outdoors until the 26 April, weeks after the sector’s reopening in England. However, Scottish hospitality will not […]

Nyx Hotels to open its first UK property in May

Leonardo Hotels UK & Ireland has announced it is to open its first NYX Hotel in the UK on 17 May. NYX Hotel London Holborn is the 11th hotel in the group’s global city centre portfolio that includes properties in Tel Aviv, Madrid, Milan, Munich, Bilbao and Prague. The hotel, named after the Greek Goddess […]

European operators were banking on summer 2021 providing an opportunity to start generating some much-needed income. However, many travelers have remained hesitant and the anticipated boom in travel may not occur to the desired extent. With uncertainty over what travel restrictions will be in place, many travelers remain reluctant to book, says GlobalData, a leading […] 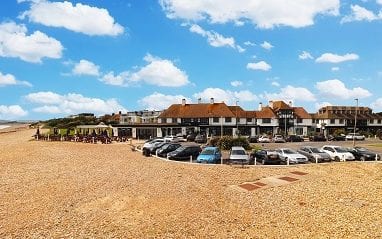 The Cooden Beach Hotel in Bexhill-On-Sea, East Sussex has been sold off of a guide price of £6.9m to international hotelier Grace Leo and her Singapore-based partner, shipping entrepreneur and hotel investor, Tim Hartnoll. The Cooden Beach Hotel was built in 1928 and houses 41 bedrooms and a “popular” beachside restaurant. The pair’s acquisition of […]